Jalan Jalan's Bali is one of the most haunting albums of the year. The debut album by this Japanese group takes the sounds of the Balinese gamelan (although the slow cadences are more Javanese), and with pianos, flutes, small percussion, and environmental sounds, they loop melodic cycles into a deftly subtle fabric. There's an austerity and simplicity of form with its sense of elegiac repose and resigned melancholy, particularly evidenced in tracks like "Firefly Sanctuary." The canon form, in which most of these pieces are written, and its stately pace make this music seem like it could go on forever, and you wish it would. --John Diliberto, radio host, Echoes 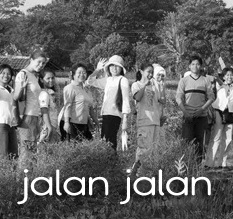 Jalan Jalan is a musical ensemble assembled by members of SORMA, a group of musicians lead by keyboardist/arranger/composer YOICHI SHIMADA. Jalan Jalan specializes in ambient music for deep relaxation. Their music being heavily influenced by the nature and mystique of the Balinese islands (Indonesia), they often use the traditional Indonesian instrument - the Gamelan, to create a warm and relaxing atmosphere. Jalan Jalan means “a walk” or “a stroll” in the Indonesian language.