On SUNRISE, Michael elegantly weaves together his own performance on guitars, Balinese gamelan, piano, keyboards, drums and percussion while eliciting both spontaneity and sophisticated responses from the ensemble musicians.

Ensemble musicians include: Stephanie Bennett on harp, Brice Martin on flutes and recorders, Hersh Hamel on sitar and tanpura and Sandy Howell performing ethereal, chant like vocals on the track Reunion. The end result is massage music that both elevates your spirit and grounds your consciousness in the here and now.

One of Michael’s many fans eloquently defined the musical spell of SUNRISE best with this description, “the sound is very profound, deep, and you cannot help but contact your inner self.”

sunrise is the best part of my day! this is the perfect massage music. 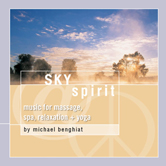