Numinous by George Skaroulis is his second release and most acclaimed massage music album. Ambient and calm, Numinous is the perfect album for massage, yoga and meditation. Spiritually inspired and physically calming, this is excellent ambient music for massage therapy. 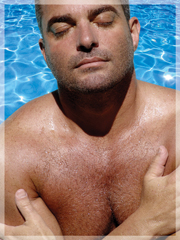 "George Skaroulis is a self-taught pianist and passionate young composer. He has created Numinous, an inspirational collection of radiant piano/synthesizer music that has been commissioned by an art gallery owner as original theme music for a spiritual art exhibit showing in six art galleries in Atlanta. Numinous, a word meaning 'appealing to the higher emotions or to the aesthetic sense: in the presence of divinity, or spiritual,' is spiritually inspirational and also physically calming, an excellent ambient music for massage therapy.

Skaroulis skillfully combines the use of tonal color, texture and rubato-a free expression of rhythm to evoke emotion in is music. Skaroulis does this through tones, his adoration for the divine, as well as his humble humility." - David Moore, Massage Magazine

"Greek culture figures into my music pretty strongly; both of my parents are Greek. It has a lot of influence on Numinous. To an outsider, it may not be so obvious in the music itself, but the melodies are definitely influenced by that. My circle of friends and family is so important to my well being I thought it was appropriate to acknowledge their influence on my music. 'Into the Sea' was the only song that I wrote on Numinous that came from my stay on Patmos. I visit whenever I can. We have relatives there and we stay at my grandfather's home. It's a tiny, beautiful place. Very primitive. It's a hundred years old and full of inspiration." - George Skaroulis