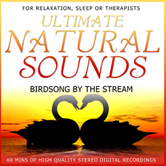 Listen to the gentle sounds of lazy water with charming English birdsong. This album, Ultimate Natural Sounds: Birdsong By The Stream, was recorded, balanced and mixed by top producers Llewellyn and Niall.

The Ultimate Natural Sounds Series is about creating calm natural atmospheres without sudden loud noises or interruptions. Recorded by Niall on location in Castlethorpe, Bucks, UK. This gentle stream runs through a wooded area full of wildlife into the River Tove. 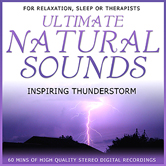